Healing and raising up 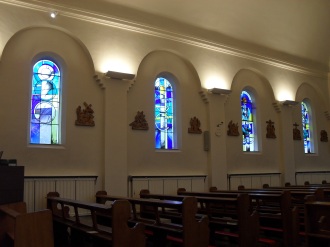 The sacrament of the Anointing of the Sick and the sacrament of Reconciliation (or Confession) both deal with the issue of health and sickness. The sacrament of Reconciliation is about the health of the soul, which is affected by sin as a body is affected by illness. The sacrament of Reconciliation brings healing to the inner person through the ministry of Christ, the physician of the soul. The sacrament of the Anointing of the Sick, on the other hand, deals instead with illness of the physical body – disease, deformity, old age: any condition of the human person which compromises their physical health and significantly restricts their way of life. I say ‘significantly’ because all illnesses compromise my ability to enjoy life: but we are dealing here not with cases such as the common cold or a cut finger (which are short-lived and usually not serious in their effects) but with more serious threats to our overall welfare such as any case involving major surgery, debilitating illness (such as one suffering from the effects of a stroke), worsening health (old age, arthritis) or even conditions which are not usually serious but have become so in a particular case (such as some sufferers in the ‘flu outbreak in Jan. 2000 – usually not a serious illness, but in this case it was particularly savage and some lost their lives).

This sacrament gives us the opportunity to face the character of human suffering and to integrate it into our lives of faith in God. Our Christian faith is to be lived out in the details of every day of our lives – this means it has a relevant place in suffering as well as in joy and health. Indeed, you could say that how the faith copes with the experience of suffering and how it understands suffering is the key acid test of our belief. If we can not reconcile faith with suffering (and are led to doubt or to abandon belief in God entirely because of the suffering we experience or hear about in the lives of others) then we have left the cross out of Christianity – not only did Christ accept suffering but He chose to use that human experience as the one by which He would win our salvation. And more than this, He explicitly invites all His disciples throughout the centuries to share in that redemptive act of self-sacrifice:  If any man would come after me, let him deny himself and take up his cross and follow me. (Mt. 16:24)

He goes even further: this is not an invitation to voluntary sacrifice but a defining characteristic of the follower of Christ. Without being prepared to sacrifice ourselves and suffer while preserving our faith in God, we disqualify ourselves from Christ, from discipleship and from the kingdom: Whoever does not bear his own cross and come after me cannot be my disciple. (Lk. 14:27)

Christ does not mince his words: the faith means facing suffering – not just the usual illnesses of human life to which we are all subject, believer and non-believer alike, but in addition, the sufferings which come to us as a direct result of faith in Christ.  Blessed are you when men revile you and persecute you, and utter all kinds of evil against you falsely on my account. Rejoice and be glad, for your reward is great in heaven, for so men persecuted the prophets who were before you. (Mt. 5:11-12)

He gives us a simple, stark, but bitter teaching to accept: believing and submitting ourselves to Christ means that we will suffer, sometimes more than is asked of others in this life: it does not make us immune from suffering. The sacrament of the Anointing of the Sick helps us to integrate our sufferings in this life into a perspective that underscores our faith rather than throwing it into doubt and confusion. It acknowledges the reality of human suffering rather than running away from it, and it recognises the damage it can do to the faith of the believer. It gives human suffering, in all its serious forms, a vital place in the mystery of the Christian life. It addresses the grave injury which we sustain in the life of faith when our physical health is impaired. In short, it takes illness and suffering seriously, and strengthens us when we are at our weakest.

The name of the sacrament has changed in the last generation: this reflects a change in mentality towards the sacrament. In 1950 we would have spoken about “Extreme Unction” – the sacrament of Anointing (‘Unction’) that was administered to those who were dying (“in extremis”). The sacrament was thought of in terms of helping the dying to meet the Saviour in a state of grace – and so was not given to those who were suffering from illnesses which were not at that moment life-threatening. Before we are too critical of the way it used to be done, we should remember that the practice of a previous generation made as much sense to them as the change of practice initiated by the present generation makes to us – we are all subject to the critical judgements of future generations. Nevertheless, the change in name and thinking about the sacrament does permit us to administer the sacrament to those who have the opportunity to recover, thus restoring the emphasis of this sacrament’s nature as a sacrament of healing.

“(The sacrament of the Anointing of the Sick) is not a sacrament for those only who are at the point of death. Hence, as soon as anyone of the faithful begins to be in danger of death from sickness or old age, the fitting time for him to receive this sacrament has already arrived.” (C.C.C. 1514, quoting from the Code of Canon Law, canon 1004)